Posted on February 18, 2018 by lifewithclottedcream

I love the rain. When it rains in South Africa we eat pancakes. I love pancakes. I was elated when I moved to England and it rains at least once a week. That could only mean one thing: pancakes will be a regular feature in my kitchen, unlike its infrequent visits in South Africa. Sadly it turned out to be only a fantasy as I soon learnt that my rainy day tradition is not replicated here. I did learn though that the British people do love pancakes. But only once a year. With sugar. And lemon. Weird!

Whenever pancake night approaches I start planning it carefully about a week in advance. I want to make pancakes the star of the show and not as an afterthought to dessert. There will be savoury and sweet fillings and loads and loads of pancakes.

This year I’ve incorporated traditions from both sides of the equator.  During our pancake feast we’ve celebrated with not only cinnamon sugar and lemon curd, but also curried beef mince and avocado.

Lately I’ve been having this insane craving for melktert and I thought this would be a great opportunity to make a nice big batch as a little present to myself to celebrate the fact that I made it through another half term. Melktert is a milky custardy tart with a cinnamon sprinkle. Like cheesecake, it can be baked or chilled as a filling over a baked piecrust. I don’t like pastry so I love just having the filling on its own!

Here is my mother’s pancake recipe:

This makes about 20 pancakes. 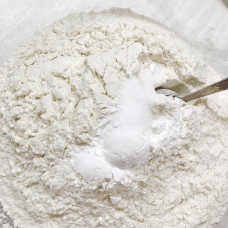 Serve these delicious sheets of goodness on one (or all) of the following:

Melktert filling after egg is beaten in 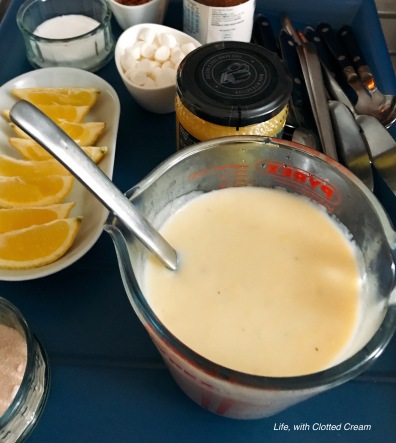 Other fillings on the table:

To freak out our guest (he thinks my taste in food is completely unconventional) I convinced him to eat his pancakes with the following combination:

He loved it so much he had three more!

Pancake with mince, avocado and cheese

← Translate that!
A Gastronomic Journey through London →